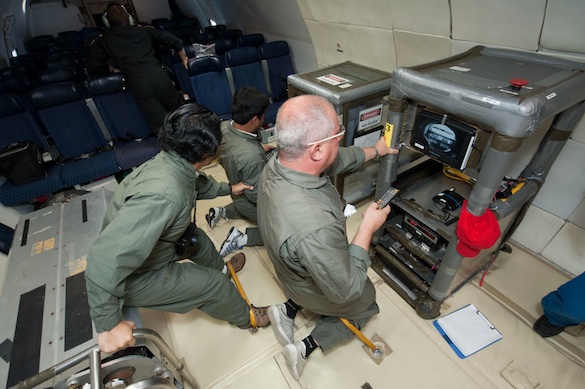 Pool boiling is a highly effective mode of heat transfer allowing high heat flux levels driven by relatively small temperature differences between the heated wall and the liquid. In spite of its efficiency, cooling based on liquid-vapor phase change processes has not yet found wide application in aerospace engineering due to specific process uncertainties and related reliability problems associated with the low gravity environment. Even less is known about the impact of electric fields on heat transfer in boiling in microgravity and their potential for heat transfer enhancement under such conditions. The primary objective of the experiment is to determine the effect of electric fields on pool boiling in low-g.

University of Maryland: Press Release of prior flight testing

Two-Phase Flow Research on the ISS for Thermal Control Applications

Previous measurements have shown that heat transfer in boiling in microgravity can be higher than that in earth gravity at low wall superheats due to an increase in the number of nucleation sites on the surface, with a corresponding decrease in the critical heat flux. The measurements to date indicate that critical heat flux in microgravity under saturated conditions decreases to roughly 30% of that in earth gravity. Based on the remarkable improvements accomplished under terrestrial conditions, the use of electric fields to replace the gravitational body force shows great potential to increase the amount of heat that can be transferred from a surface in microgravity. This experiment describes work where local heat transfer is measured simultaneously at many points on the heater surface in an effort to determine how boiling heat transfer is affected by the missing gravity and as an additional parameter by the electric field.

Experiments will be carried out from the nucleate boiling regime through critical heat flux into the transition boiling regime. Heat transfer data will be obtained at various gas concentrations and/or bulk fluid subcooling levels with and without electric fields using a microheater array.

The primary rack (see below, left rack) contains a sealed chamber containing about three liters of n-perfluorhexane at 1 atm (boiling temperature is 56Â°C), a microheater array to measure heat transfer distribution during boiling, a rack of electronic feedback circuits, two 30 Hz video cameras, a computer, and a LCD display. All components are contained within a Vertical Equipment Rack (VER) provided by NASA and designed for use on the parabolic aircraft. The secondary rack (right) contains a high-voltage power supply for the electric field measurements, and a triple output power supply, and a 28 VDC power supply. The components are contained in an AMCO 50â Equipment Rack (AER) provided by NASA and qualified for parabolic aircraft flights. 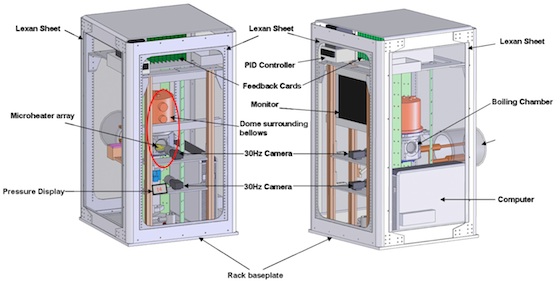