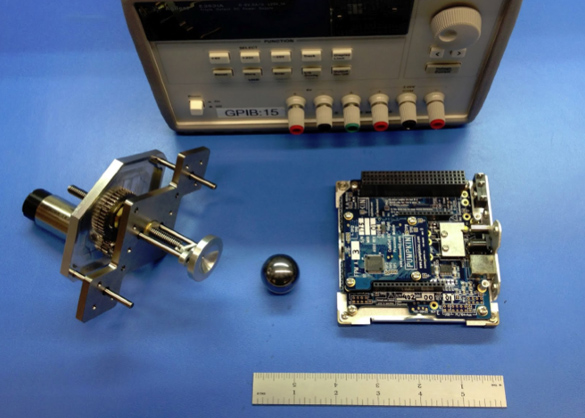 Next generation drag-free space systems will provide autonomous precision orbit determination, more accurately map the static and time varying components of Earth's mass distribution, aid in our understanding of the fundamental force of gravity, and ultimately open up a new window to our universe through the detection and observation of gravitational waves. At the heart of this technology is a gravitational reference sensor, which contains and shields a free-floating test mass from all non-gravitational forces. A caging mechanism is used to mechanically secure the test mass during launch and release it with a low relative velocity once the satellite reaches its designated orbit. The test mass dynamics during the uncaging process canât be studied in a laboratory environment. We plan to use the parabolic flight opportunity to test the caging mechanism in a zero-g environment and acquire data to analyze the test mass dynamics.

The flyers experimented with a variety of ways to hold the system and release it into free-flight. Video data were collected for un-caging and re-caging operations with six different release attitudes, four different operating speeds, and five different video settings for resolution and frame-rate. Computer vision algorithms will be used to process the video and extract information about the relative motion of the test mass.

At the time of our response to the Announcement of Flight Opportunity, Stanford possessed a working bench-top model of the system. In our proposal, we stated our intention to bring the technology from Technology Readiness Level (TRL) 4 to TRL 6, by testing the system in a relevant environment and improving its fidelity compared with its operational embodiment. In particular, the ability to maintain caging force under random vibration and successfully operate in zero-gravity were put forward as tests in a relevant environment. Installation of the system in a 3U CubeSat structure and integration with CubeSat electronics has moved the system a step closer to deployment.