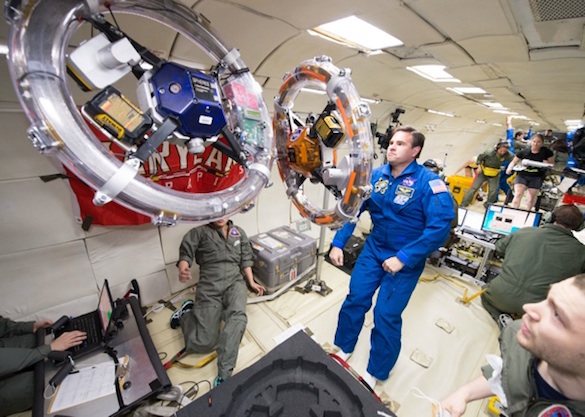 Over the past decade, research has been conducted on the technology of Electromagnetic Formation Flight (EMFF), which uses the local generation of electromagnetic fields by the vehicles of a spacecraft cluster to control their relative degrees of freedom without consuming propellant. RINGS, which stands for Resonant Inductive Near-field Generation System, provides a hardware implementation of EMFF that will operate as a payload on SPHERES, the formation flight test facility onboard the International Space Station (ISS). To maximize productivity during the planned ISS test sessions, we will use a parabolic flight campaign to conduct preliminary formation flight testing and begin the control algorithm refinement process.

Spacecraft formation flight is a potentially enabling technology for any mission where the desired operational size of the structure exceeds the existing launch shroud capacity. This will very likely be the case for future on-orbit telescopes. Examples include the synthesis of very large apertures by a sparse array of smaller apertures, or the assembly of a large segmented aperture from a highly compact stowed configuration, such as might be done for a larger version of the James Webb Space Telescope.

The parabolic flight tests of RINGS will act as a bridge between extensive 2D ground testing and long duration 3D testing onboard the ISS, whereby an array of control approaches can be evaluated in a realistic dynamics environment. Any major control implementation issues can be addressed in the intervening periods between flights over the four-day campaign, and the solutions could prevent the loss of valuable testing time on-orbit.

Propellantless formation flight could benefit or enable any mission where a large degree of reconfiguration is necessary, either during the construction phase of a system that is too large or complex to be deployed from a stowed configuration, or during the operations phase when filling in the u-v plane of sparse aperture. Future space telescopes such as Terrestrial Planet Finder, Stellar Imager and Constellation-X, could have their operational lifetimes greatly extended from this technology.

The primary objectives of the parabolic flight campaign are to:
1. Evaluate the close-proximity force and torque models without disturbances introduced by ground testing
2. Acquire dynamic response data in a representative âzero-Gâ environment
3. Provide a preliminary evaluation of the stability of several control approaches in 6 DOF

While these objectives can be achieved once the hardware is on-orbit, the 40-50 minutes of cumulative test data taken during a four day parabolic flight campaign could represent a savings of numerous hours of on-orbit test time and several weeks of cumulative development time. The reason for this leverage is the structure of the flight campaign versus on-orbit test sessions.

Due to the nature of the hardware, it would be free flying within a mostly empty volume. Some posts along the walls will be necessary to mount metrology sensors. The individual payload elements are only 80cm x 80cm x 30cm, however because the purpose is to test formation control of these free- flying elements, the volume in which they operate needs to be larger than the hardware itself. The volume would ideally extend the full width and height of the fuselage with about 300-400 cm extending along the axis of the fuselage. 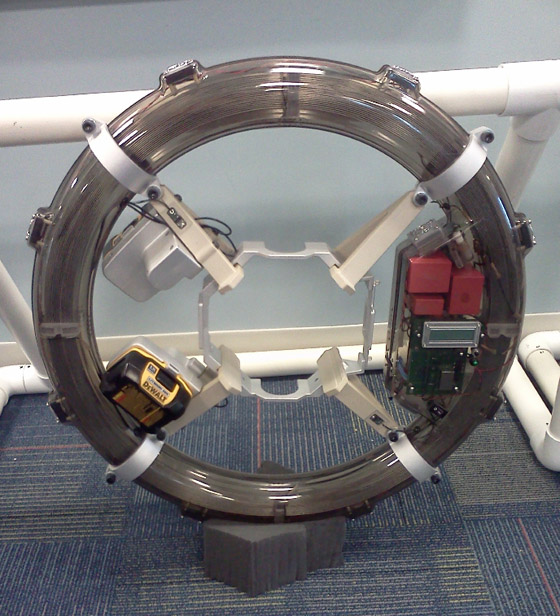 âRINGS: The Resonant Inductive Near-field Generation Systemâ, is a joint DARPA/NASA funded program to demonstrate and mature two technologies that could enable future space missions involving formations of multiple spacecraft. The RINGS project is a collaborative effort among The University of Maryland Space Power and Propulsion Lab (UMD SPPL) under direction of Prof. Ray Sedwick, Aurora Flight Sciences (AFS), and the Massachusetts Institute of Technology (MIT).

The first of these technologies, referred to as âElectromagnetic Formation Flightâ or EMFF, is a propellant-less propulsion technology that uses locally generated magnetic fields to produce forces and torques between the vehicles. The second technology to be demonstrated is a form of wireless power transfer (WPT) referred to as resonant inductive coupling (RIC), a non-radiative and largely non-directional power transfer approach that could be used to power a fleet of small spacecraft.

RINGS will be flown internally onboard the ISS as a payload on the SPHERES formation flight facility. The high fidelity system identification data obtained on the reduced gravity flight allows for development of effective control algorithms for vehicle motion. The goal of testing on the ISS will be to further develop and mature control algorithms for EMFF, and further promote EMFF as an alternative method of maneuvering formation spacecraft. When coupled with reaction wheels or control moment gyros, EMFF can offer full controllability of the relative degrees of freedom within a spacecraft cluster without expending any propellant. Removing reliance on propellant as a life-limiting resource will allow operation for a much longer period, greatly increasing the science return. The end goal of the RINGS flight program is to promote EMFF and WPT using RIC to a technology readiness level of 6 using a single, compact hardware set.

The Flight Opportunities progarm allowed for the first demonstration of EMFF and WPT in a reduced gravity environment. The system identification testing is difficult to achieve in a ground laboratory where many disturbance forces are present. Establishing these parameters before on-orbit operations allows for the control codes to be more mature upon initial deployment, and could save an entire development cycle that might otherwise be lost to fine-tuning. The experience presented a wealth of operational information that cannot be anticipated during 1-g operation, assisting with development of ISS operational procedures and promoting of greater science output during limited operational windows on-orbit.