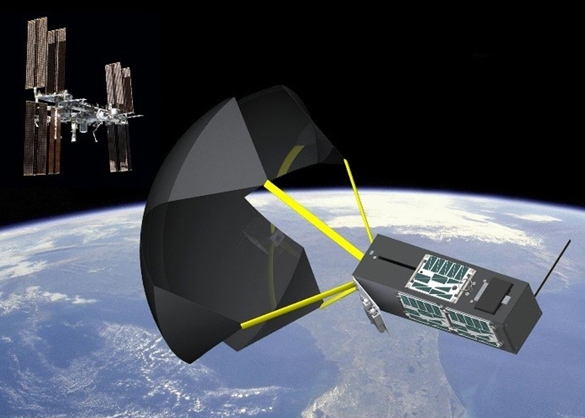 The exo-brake is an exo-atmospheric passive braking device, like a specially designed parachute that operates at extremely low pressures, which will eventually enable small samples to be returned from the space station or other orbital platforms. In addition, this technology is intended to help enable future small or nanosatellite missions to the surface of Mars and other planetary bodies in the solar system.

The principle behind the exo-brake is the same one that causes orbital decay and sends old satellites plummeting back to Earth. Though space officially starts 62 mi (100 km) up, the atmosphere actually extends hundreds of miles above that as the exosphere. It's extremely tenuous, but there are still enough air molecules present to gradually slow down satellites until they succumb to the pull of gravity, re-enter and burn up. Exo-braking exploits the exosphere by deploying a drogue chute with an area of about one square meter (10.7 sq ft) per kilogram (2.2 lb) of satellite.

The exo-brake is deployed once the satellite is released to demonstrate a passive de-orbit system for satellites. The assembly is a simple drag-based de-orbit mechanism, like a specially designed parachute that operates at extremely low pressures. Exo-brake is a tension based structure with advantages over other designs, e.g. a high stability and possibility of drag modulating to provide a targeting capability.

The initial exo-brake version was successfully flown on the TechEdSat-3 nanosatellite in late 2013. The next steps will include a drag modulation scheme which will lead to improved targeting at the von Karman altitude. Future applications include a sample return capability â as well as a novel means of testing future small scale reentry concepts for planetary mission applications.