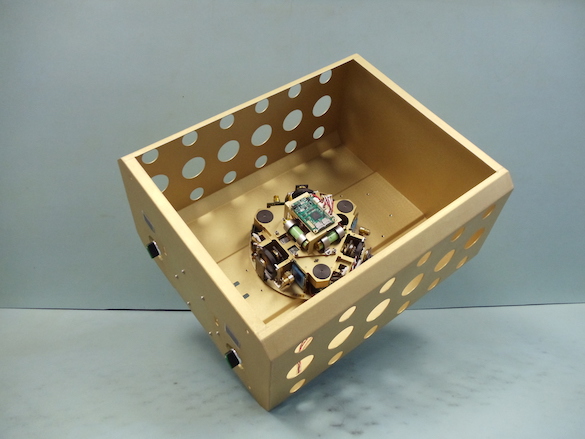 The Vibration Isolation Platform (VIP) from Controlled Dynamics Inc. (CDI) provides a sustained microgravity environment to research payloads flying on orbital and suborbital vehicles. The VIP is a payload mounting interface which includes active stabilization and 6-DOF non-contact isolation. During launch, re-entry, and landing, the research payload is mechanically secured to the vehicle. During parabolic coast or in orbit, the research payload is automatically released on a 6-DOF free-floating platform. The payload is caged to follow the low-frequency inertial motion of the host vehicle, but otherwise left undisturbed to float freely in the sway space of the VIP. A âÎ¼g OKâ discrete signal is provided to the payload when the acceleration environment is acceptable for conducting microgravity research.

Following initial development of the VIP, Controlled Dynamics proposed the same technology for use as a stabilization platform for optical communications. This resulted in follow on SBIR awards (SBIR Phase I (2013), SBIR Phase II (2014)), and subsequent infusion of the technology into the Deep Space Optical Communications (DSOC) demonstration on the Psyche mission.