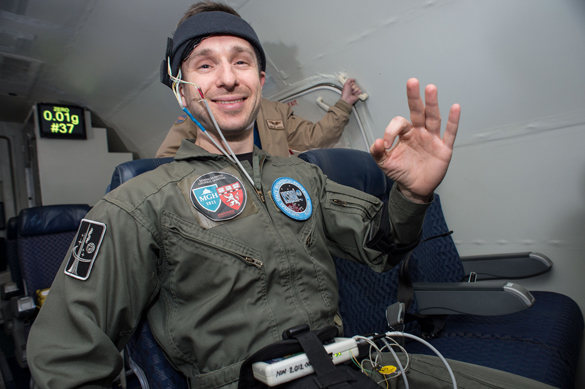 NASA has a limited ability to assess brain physiology during spaceflight. This is of particular concern given the recent visual impairments thought to be related to intracranial hypertension (aka Visual Impairment due to Intracranial Pressure or VIIP). The primary objective of this project is to test and validate â during parabolic flight â a new near infrared neuroimaging (NIN) instrument, NINscan 4a, for non-invasive measurement of cerebral hemodynamics. NINscan 4a allows functional neuromonitoring based on the principle of near infrared spectroscopy (NIRS). Validation of this system is an integral step in our broader research efforts to develop technology for inflight assessment of cerebral physiology.

Alterations in cerebral physiology and hemodynamics have been identified as a potential biomarker for predicting sensorimotor and cognitive performance alterations, and have been associated with elevated intracranial pressure (ICP). Elevated ICP has in turn been hypothesized to underlie the new spaceflight risk of visual impairment and intracranial hypertension (VIIP). VIIP has been found to occur during spaceflight and affects, to at least some extent, nearly 70% of U.S. astronauts. Assessment of cerebral hemodynamic changes may help identify cerebral alterations associated with VIIP onset. In addition, spaceflight-induced alterations in sensorimotor performance are serious risks for mission-critical operations, including docking, rendezvous, landing, and post-flight performance in planetary conditions (e.g. Earth, Moon, Mars).

The proposed series of parabolic flights will specifically validate the novel NINscan 4a to (1) provide reliable NIRS measures in a spaceflight analog, (2) to provide sensitive measurement of both global and systemic hemodynamics, and (3) to detect systematic changes in cortical hemodynamics in relevant sensorimotor and vestibular cortical areas during gravitational alterations. This work will therefore serve to test/validate the use of a novel NIN device and help increase the TRL to 6.

Application of NIN to spaceflight operational environments (ISS, exploration missions) would allow for continuous or dynamic monitoring of cerebral hemodynamics and detection of alterations in hemodynamics associated with exposure to microgravity, changes in fluid distribution, and ultimately development of biomarkers for VIIP. Apart from application to human spaceflight, deliverables of this study could also find broad application to terrestrial medicine and physiology.

Cerebral hemodynamics will first be monitored observationally (as subjects transition through different gravitational forces). Hemodynamic regulatory responses will be elicited by consecutive Valsalva and Mueller maneuvers. Cortical hemodynamic parameters â deoxygenated hemoglobin (HHb) and oxygenated hemoglobin (O2Hb) â will be recorded by NINscan 4a in the prefrontal cortex. A sensor pad containing a laser light source and two optical detectors â located linearly at 1.5, and 4cm from the source; each recording refracted light at 830nm (6KHz) and 780nm (650Hz) â will be attached in contact with participantsâ skin above the right frontal bone adjacent to the temporal line and superior to lateral supraorbital process. The sensor closer to the light source will record signals primarily from scalp and skull, whereas the farther sensor is also sensitive to cortical tissue. The blood perfusion recovery in the brain was expected to precede that in the scalp due to intact regulatory responses. Head motion during trials will be monitored by an integrated triaxial accelerometer placed on the participantsâ forehead. Onsets of Valsalva maneuvers will be marked by event markers synchronized with the collected data stream.

NINscan systems only require inserting AA batteries for operation. Buttons on the face of the box can be used to synchronize with external events. 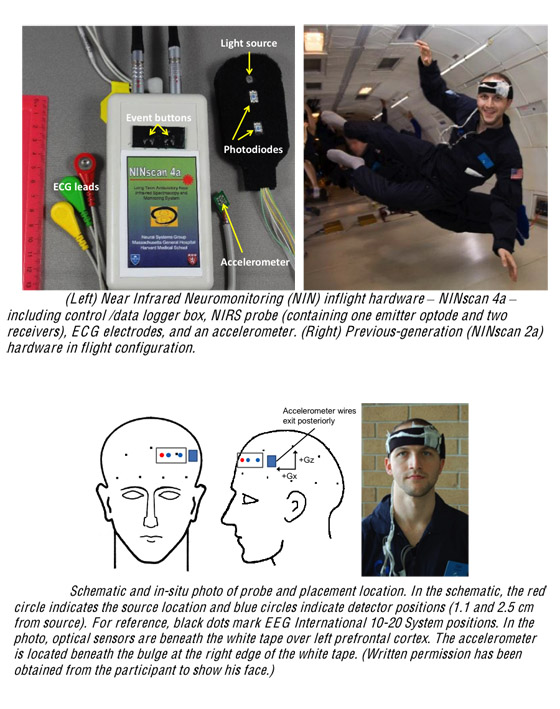