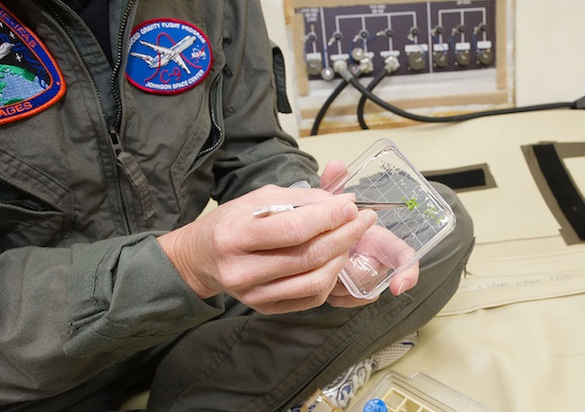 The specific objective of this experiment is to take fluorescent imaging instrumentation developed for our shuttle and ISS experiments and calibrate the hardware and data collection capabilities to timeframes optimal for parabolic flight and suborbital applications. We will build on extensive insights gained from spaceflight and ISS deployments of similar technologies, along with PI experience on previous parabolic flight campaigns, to address future science and technology deployments in parabolic and suborbital campaigns. This technology has longer term development potential for small satellite and planetary lander applications as well, and speaks directly to aspects of the Nanotechnology Road Map (Technology Area 10), particularly the development of sensitive, next-generation imagers that can collect data telemetrically, and in real time.

The fundamental technology to be advanced is an integrated bundle of biotechnology and spaceflight hardware instrumentation. The biotechnology consists of biosensor organisms, in this validation case Arabidopsis plants engineered with a variety of Green Fluorescent Protein (GFP) reporter genes designed to report the biological response of a plant, or plant tissue, to its environment. The goal is to advance the TRL of the GFP Imaging System (GIS) such that it can be designed into a stand-alone, mission-autonomous technology that is monitored solely by telemetry and is relevant to future parabolic and suborbital opportunities for science.

Successful testing of the hardware within the parabolic flight environment immediately raises the TRL of the system to 7 or 8. After this testing, future parabolic flight experiments could then make essentially direct use of the GIS-III UFGRâlevel imager. The commercial suborbital environment potentially fills the gap between parabolic flights and longer term orbital deployments such as shuttle and ISS. Successful parabolic demonstration of GIS-III offers development pathways through stand-alone

Although the focus is on applications to parabolic and suborbital flight platforms, insights gained here will support future applications and opportunities, including ASTID proposals, future Human Tended Suborbital calls and SALMON missions such as providing a next-generation instrument for science return from GeneSat and other related satellite missions, as well as future parabolic opportunities dedicated to science. This technology also has longer term development potential for small satellite

Our technical and operational aims for this flight are to use the parabolic platform to calibrate imager performance with biological responses, and to identify the development path for future deployment. The hardware instrumentation technology consists of the specialized imaging system, the GFP Imaging System (GIS) imager. We have strong evidence for rapid gene responses within parabolic flight parameters that are very different from the gene responses after days on orbit. This leaves a large gap in knowledge regarding the early stages of spaceflight adaptation. Our science hypothesis is that there is a series of signal transduction events that progress from the onset of a flight environment through an acclimation phase that leads to spaceflight adaptation.

The integration and utilization of the GIS imaging hardware is shown in the Figure below. The GIS was flown within FastRackTM, hardware (1A) developed at Kennedy Space Center to support Shuttle middeck locker-equivalent payloads in a variety of platforms. FastRack supplies power and containment to the GIS. The GIS is housed inside a middeck locker drawer (1B), and contains from one to six 10cm plates of biology (1C). The GIS is synched to a computer and calibrated before the start of the parabolas (1D) and then data are collected during flight at various times during the parabolic profiles (1E). The data output is a series of fluorescent images that display plants expressing Green Fluorescent Protein (GFP) gene reporters (1F). The GIS technology allows us to take biology to places where it may be impossible to collect gene expression data in real time, and also enables data collection with little or no human involvement. This approach has been vetted in the Ferl / Paul ISS experiment launched on STS-129, and can be envisioned for applications that include untended suborbital sorties and unmanned planetary landers. 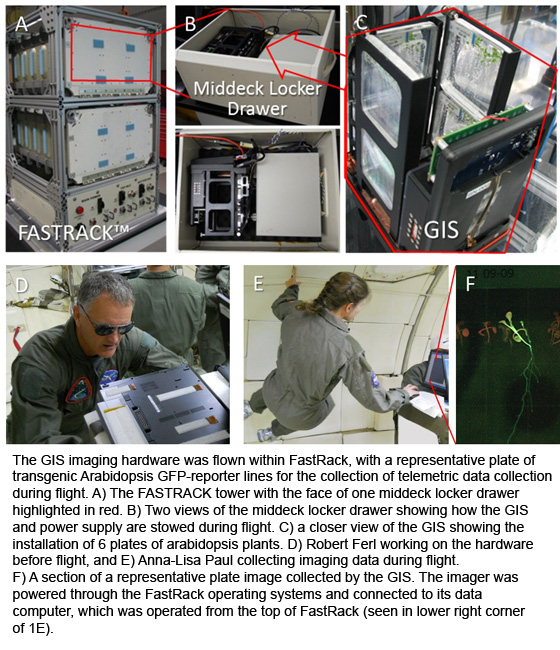