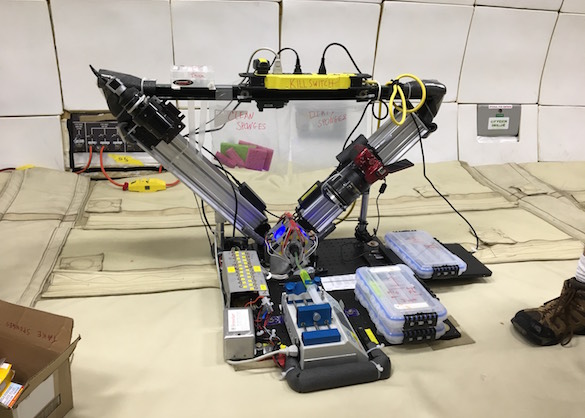 The goal of this project is the determination of design parameters for the Ring-Sheared Drop (RSD) module on the ISS. The technology currently under development jointly by Rensselaer Polytechnic Institute, Marshall Space Flight Center (MSFC), and Glenn Research Center (GRC) is a novel project that will examine the effects of shear at fluid hydrophobic interfaces on amyloidogenesis. The ability to study shearing flow in absence of solid walls and buoyancy-driven convection is unique. Amyloid fibrils are of significant interest due to their central role in a number of neurodegenarative diseases, including Alzheimerâs and Parkinsonâs, as well as their role in type-2 diabetes. This project is designed to use parabolic flight testing to collect design data that will ensure success of the RSD module for its flight(s) aboard the ISS. This work is a continuation of T0146.

In February 2016, the first parabolic flights successfully demonstrated pinning of water drops at 10 mm scale. These new flights seek to study drop formation using protein solutions at a scale of 15 mm, in a progression toward the 25 mm scale of the RSD module aboard the ISS.