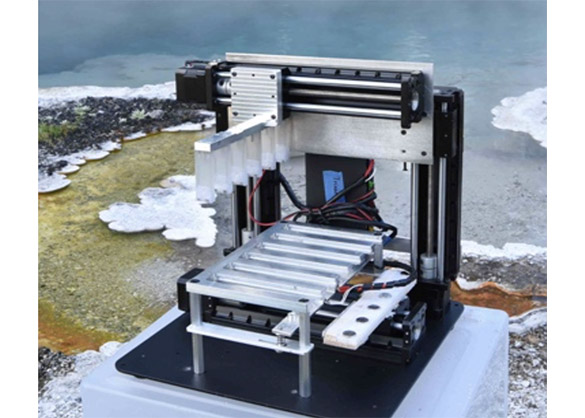 Current ISS missions, and longer duration deep-space flights to the Moon and Mars will require microbial monitoring of spacecraft surfaces, water systems, and crew health. The Î¼-Titan is a multi-purpose sample processing device that with the addition of the portable MinION protein sequencing device, can combine all of these necessities into one sample processing device; cutting down on training for astronauts, spare replacement components, and physical cabin space aboard a spacecraft. A parabolic flight, where the entire system can be tested, is the next risk reduction step in determining the instrument's DNA extraction ability under Î¼-gravity conditions in preparation for future ISS flights.

The current protocol for microbial monitoring on ISS using molecular techniques involves sending samples back to terrestrial laboratories which can take up to four months after the time of collection. In order to improve microbial monitoring on the ISS and in future human missions to Mars and beyond, there needs to be an automated, streamlined, and microgravity compatible DNA extraction instrument. The omics in space team developed such an instrument and dubbed it Î¼-Titan (short for the micro(Î¼) gravity Tolerant InsTrument for Automated Nucleic acid extraction). The Î¼-Titan can process multiple samples simultaneously, producing real time data output, while running automatedly, and functioning at a variety of gravity levels, from 1G to Martian to the Î¼-gravity of space.

The majority of the system, including the robotic arm and base, chemistries of the extraction fluid and activities of magnetic particles in solution, should not be affected by microgravity conditions. The only portion that would be affected are the fluid filled wells. To mitigate this problem, microgravity compatible wells have been designed to passively hold the liquids in place. A parabolic flight, where the entire system can be tested, is the next step. Anticipated TRL after flight: TRL-6/7.

Once aboard the ISS the Î¼Titan will be able to help complete the pipeline for âsample in answer outâ microbial analysis, both testing for surfaces and water supplies aboard the station and aiding as a clinical diagnostic device.