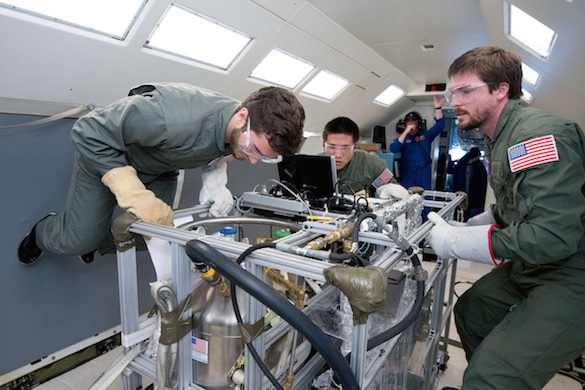 The extension of human space exploration from a low earth orbit to a high earth orbit, then to Moon, Mars, and possibly asteroids and moons of other planets is one of NASAâs biggest challenges for the new millennium. Integral to this is the effective, affordable, and reliable supply of cryogenic fluids. The efficient and safe utilization of cryogenic fluids in thermal management, power and propulsion, and life support systems of a spacecraft during space missions involves the transport, handling, and storage of these fluids in terrestrial, reduced gravity and near-zero gravity conditions.

This work continues under T0172.

When any cryogenic system is initially started, this includes, rocket engines, thrusters, turbo engines, reciprocating engines, pumps, valves, and pipelines, it must go through a transient chill down period prior to operation. Chilldown is the process of introducing the cryogenic liquid into the system, and allowing the hardware to cool down to several hundred degrees Kelvin below the ambient temperature. The chilldown process is anything but routine and requires a well-thought out design to chill down a cryogenic system in a safe and efficient manner. Efficiency of the chilldown process is a significant concern, especially in space, since the cryogenic propellant used to chill down the system is lost and cannot be utilized for propulsion or power generation. We have formed a team with members from academia, NASA Centers and industry to conduct a sRLV flight experiment on cryogenic line chilldown in space microgravity.

The main objective is to build an accurate line chilldown database from the experiment under an actual space microgravity condition with a duration long enough to cover the complete chilldown of a fluid transfer line or other hydraulic components. The technology before the proposed testing is at TRL 4. The system has been tested for short durations first in drop towers (~2s) and then on parabolic flights (~30s), both of which demonstrated the chilldown process in incremental runs.

The next step is to test in a long enough duration to accomplish a complete chilldown process in space microgravity or a free fall environment. Testing the chilldown component for a full chilldown using cryogenic propellants in microgravity will advance the technology to TRL 5, as it will be a component test in a relevant environment. The microgravity chilldown methodologies and engineering models are expected to have direct applications and benefits to both NASA and industry.

A previous configuration of the proposed experiment was flown twice during a parabolic campaign in 2011 (see image above). This previous flight experiment simulated the chilldown process with liquid nitrogen by measuring the temperature profiles and observing the flow pattern development in a straight test tube. The sRLV experiment will be based on an evolved version of this payload. In order to obtain different section views of the flow patterns, several optical benches have been designed inside the test chamber to hold prisms and mirrors. Each of the benches can be rotated independently to align to the camera lens. Background lights are located at the bottom of the chamber as well as the top. Two lights from different orientations can provide softer illumination inside the chamber. This updated optical system will allow us to capture better images from several directions.

Major components include a liquid nitrogen Dewar, a pressurized nitrogen gas cylinder, a stainless steel tube casing, a vacuum pump, a background light, a set of data acquisition system and a high speed camera. The tube is made of Pyrex glass, instrumented with thermocouples, with a thickness sufficient to handle the stresses, temperatures gradients and pressures involved.