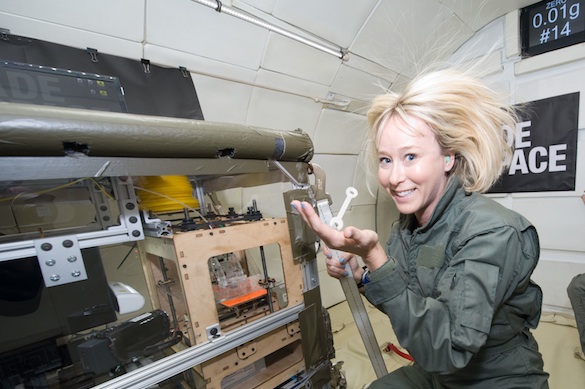 Made in Space, Inc. will fly 3D printers on parabolic and sub-orbital research flights to further develop the application of 3D printing technology to micro- and zero-gravity environments. The 3D printing method used on these flights will be Fused Deposition Modeling (FDM), a technique that has already undergone limited testing in microgravity conditions, in which a feedstock is melted and extruded in a predefined pattern. These test flights and subsequent evaluation of the constructed materials will enhance the TRL level of in-situ space manufacturing via 3D printing techniques.

3D printing, also known as additive manufacturing, is an emergent technology originally developed to rapidly manufacture prototype parts. In contrast to subtractive manufacturing, where material is cut away to produce a part, 3D printers build a product bit by bit (often one layer or cross section at a time), and thus little material is wasted. Every part is built from a CAD (computer aided design) file, making the conception and creation a simple two stage process. Additionally, there are very few geometrical restrictions, and parts can be produced that would be impossible through conventional manufacturing methods. Examples include optimally designed structures that exhibit low mass, high strength characteristics, and designs with complicated features built right into the part. While 3D printing on earth is becoming a more utilized manufacturing solution, the potential benefits for space are intuitive and extensive.

The purpose of these flights is to demonstrate and enable 3D printing as a viable in-situ technology to be utilized as a tool for manufacturing in space and on other planets. The direct objectives of the proposed experiments are to build upon previous flight research and to raise the TRL level of FDM 3D printing.

The previous research will be built upon in three ways. New machines will be tested to verify earlier results on modern hardware, geometries will be printed that will verify whether unsupported structures can be built in micro-gravity, and the results will be analyzed post-flight through stress tests and under high powered microscope to conclude whether structures printed in zero gravity match those on earth in both strength and composition.

Three experiments will be tested during the flight:
1. The experimental Extended Structure Additive Manufacturing Machine (ESAMM), which will demonstrate the unique concept of printing extended structures. To test the extended structure concept, the ESAMM will print a core sample that will be operating throughout the entire flight. This will create a part that has been built in zero-gravity, two-gravity, and everything in betweenâallowing post-flight analysis across all the different gravitational loads.
2. A COTS extrusion 3D printer (Bits For Bytesâ BFB 3000), which will build a generative design structure optimized for the least amount of material used. A ground-based printer will also have printed the same part, allowing for post-flight comparison to a one-g and zero-g part.
3. A second COTS extrusion 3D printer (MakerBot), which will build a structure that doesnât have or need a surface to print on. This printer will extrude material across two beams with no support in between, demonstrating the capabilities to build without necessary support material.

During the Summer of 2011, Made in Space, Inc. tested the effects of microgravity on 3D printers in a total of three weeks of microgravity testing. The testing took place during flight campaigns in the months of July, August and September onboard the Zero-G aircraft.

Samples built during the flight were analyzed microscopically to compare layer resolution to parts built on the ground. Additional destructive tests on parts were conducted to gather data on internal structure as well as tensile and loading strengths.

The Flight Opportunities Program provided by NASAâs OCT has been fundamental in the growth of the company, and allows Made in Space to move forward effectively towards bringing 3D printing to the space environment with a fast-track approach. Using data gathered through the flight campaigns, Made in Space is currently building a 3D printer to fly on the ISS.