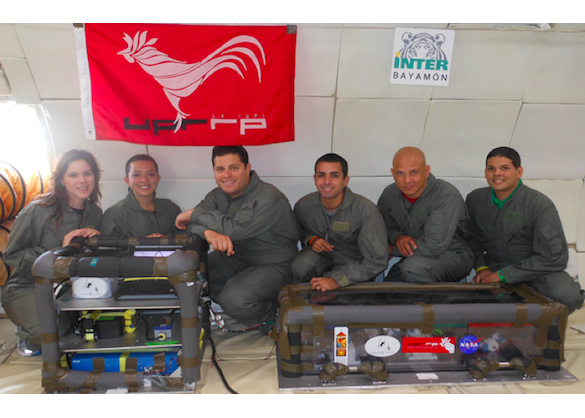 The overall concept is to create an Alternate Water Processor system that can recover water from exploration missionâs wastewater (includes surfactants found in hygiene and laundry wastes) and reduce consumable mass and power consumption compared to actual ISS systems. The system will be comprised by three components: (1) An advanced Membrane Aerated Biological Reactor (MABR) as the primary water processor which feeds to a (2) Forward Osmosis Secondary Treatment (FOST) System which then feeds ammonia solution to the key focus of this proposal, (3) the Electrochemical Ammonia Removal (EAR) system.

This project is directed to achieve a risk mitigation microgravity environment evaluation and electrode design activity for the EAR. This initiative is made in conjunction with NASA Ames Research Center and it supports the Office of the Chief Technologist (OCT) Next Generation Life Support (NGLS) project.

Paper published prior to the flight tests (July 2012): Microgravity effects on the electrochemical oxidation of ammonia: A parabolic flight experiment.

This project is for a study of the microgravity effects on nanoscale mixing of a diffusion limited process using electrochemical electrodes. In previous research by Micro-G CANM 1, the electrochemical oxidation of ammonia in microgravity conditions was utilized as the means to characterize a variety of nanomaterials according to their catalytic activity. The results of these parabolic aircraft experiments led to the measurement of a 20-65% decrease in the catalytic current under microgravity. This reduction in catalytic current is hypothesized to occur due to the lack of buoyancy driven mixing at the solution-electrode interface. It is believed that this effect is influenced by the pore size and structure of the material. This lack of buoyancy driven mixing at the solution-electrode interface may be addressed by inducing hydrodynamic turbulent mixing and by the reengineering of the electrode geometry and pore structure.

The objective of this project is to test these mitigation approaches and develop a better understanding of this phenomenon. The proposed research meets the requirements for the classification of a TRL 5 (Component and or breadboard validation in a relevant environment).

This project is critical to the Forward Osmosis Secondary Treatment (FOST) system being developed by NASA Ames Research Center and failure to complete this microgravity evaluation will result in a failure to meet key Next Generation Life Support programâs milestones. The design of the electrodes in the EAR is critical to its correct sizing and thus the FOST system.

This project will evaluate the effect on electrode performance by: employing hydrodynamic turbulence at different flow rates towards a platinum catalyst electrodeposited on a glassy carbon electrode, changing the electrode structure by utilizing bulk electrolysis, and changing the pore size by the utilization of three different mesoporous carbon supports (average diameters of: 64, 100 and 137 Ã).