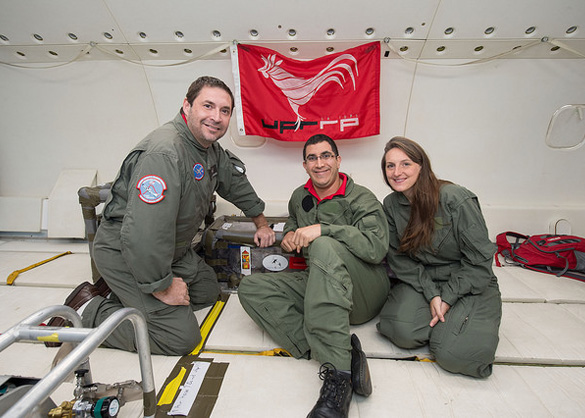 This project is a continuation of T0040-P. Recent advances in anion exchange membranes have made Direct Ammonia Alkaline Fuel Cell (DAAFC) one of the most promising and attractive fuel cell systems for water reclamation and energy production in space missions. Although recent studies have proposed direct ammonia fuel cells as the next generation of power devices, critical knowledge about the performance of DAAFC under microgravity conditions has not been addressed. The objective of this research is to assess the performance of a DAAFC using nanotechnology-based electrodes to enhance the electrochemical decomposition of ammonia under micro-gravity conditions.

Paper (April 2017): Chronoamperometric Study of Ammonia Oxidation in a Direct Ammonia Alkaline Fuel Cell under the Influence of Microgravity
Paper (2012): Microgravity effects on the electrochemical oxidation of ammonia: A parabolic flight experiment.

The long-term goal of the proposed research is to develop and demonstrate a DAAFC using nano-based electrodes to enhance ammonia electrochemical decomposition for water reclamation and energy applications. This experiment will study the effects of microgravity on the performance of a DAAFC. Previous research campaigns (Micro-G CANM 1 and Micro-G CANM 2) have shown that a reduction in catalytic current of 20-65% occurs under microgravity conditions depending on the type of catalyst utilized. With the data obtained from these two campaigns the micro-g team is determining an optimized combination between catalyst structure, porosity and hydrodynamic turbulent mixing in order to scaleup to a fuel cell.

The proposed technology is considered to be at TRL 6 since this direct alkaline ammonia fuel cell demonstrates a sub-system prototype in microgravity. Microgravity is a relevant environment since the purpose of the system is to be useable in a space environment. We believe that after this flight campaign the proposed technology will be a TRL 7. This TRL maturation will provide the team the necessary platform to further increase the TRL to 8; after the correct sizing and performance tests in this

These test flights are a performance test of a Direct Alkaline Ammonia Fuel Cell, which is a critical element of the NASA Ames Forward Osmosis Secondary Treatment (FOST) system. After the requested flight opportunities the team will be able to develop the proposed technology to be finally integrated onto the FOST system at NASA Ames.

The rationale for the consecutive flights is: (1) obtain baseline data and optimize the electrochemical performance under microgravity conditions, (2) test of microgravity adapted catalysts in a DAAFC under operating conditions, (3) obtain reproducibility of results. In order to achieve the maturity of the technology, the team will fly four different single membrane ammonia fuel cells at different conditions in order to have a better understanding of its operation under microgravity conditions. This data will be used to scale up to a fuel cell stack (multiple membranes).

The basic setup of the equipment to be utilized for these experiments is already built and has been flown before for Micro-G CANM 1 and 2 campaings, it is called the Electrochemical Microgravity Laboratory (EML). The EML is comprised of 3 separate compartments and it is capable of performing four experiments at the same time. New adaptations to the system will allow the installation of four different direct ammonia alkaline fuel cell hardware, peristaltic pumps for liquid delivery and breathing air canisters to feed the cathode side of the fuel cell.

The Electrochemical Ammonia Removal (EAR) Subsystem is a Direct Ammonia Alkaline Fuel Cell (DAAFC) as shown in the upper image below. The lower image shows the Ammonia oxidation process in microgravity and ground. 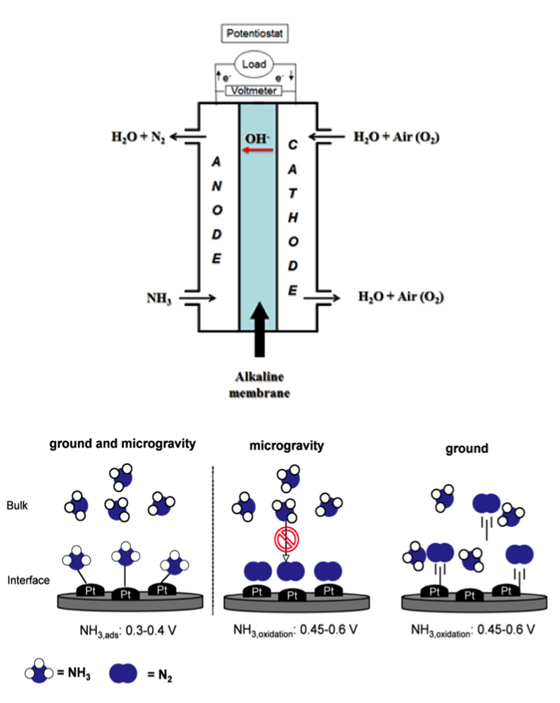