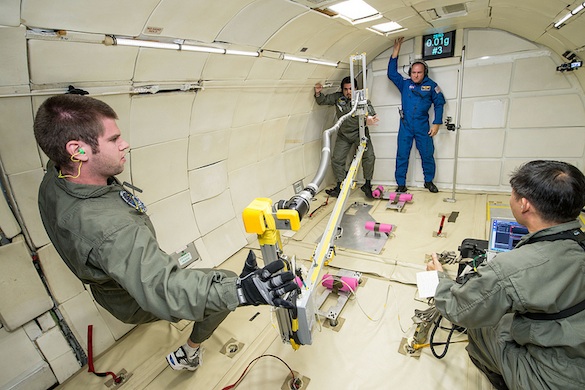 The NASA/Goddard Space Flight Center Satellite Servicing Capabilities Office (SSCO) will conduct an investigation of the behavior of a flexible fuel hose in a near-zero gravity environment. The inner core of these types of fuel hose consist of a long corrugated metal tube that is very stiff to torsion along its longitudinal axis. As a result, this type of hose can be a challenge to manipulate, sometimes resulting in the buildup of forces and torques in a robot arm, and occasionally resulting in breakage of the inner core of the fuel hose. Laboratory tests have produced handling measures to prevent this from occurring, but gravitational sag prevents a clear understanding about the effectiveness of these measures in the microgravity of Earthâs orbit.

This work is in support of the development and validation of technology required for future missions to service and refuel a satellite in space, allowing the reuse and extension of valuable hardware consisting of potentially hundreds of other spacecraft in the geosynchronous orbit. The experiment allows us to gather experimental data to allow the creation and correlation of mathematical models of the dynamical behavior of the hose in near-zero gravity environments.

The current state of the hardware is at TRL 4. By flying on the Parabolic Aircraft platform, the technology can be matured to TRL 5, in that the brassboard-level fidelity Hose will have flown in a relevant (microgravity) environment. It will provide understanding to true loads, deflections, and dynamic characteristics of the Hose in its flight operating environment.

The maturation of the Hose technology is an important part in the development flow of the SSCO projectâs overall technology development plan, and a deadline of August 2013 is required for the results of this experiment.


This flight opportunity will be used to develop a dynamical model of the as-tested flexible hose. This model will be incorporated into Freespace, a NASA/GSFC developed high-fidelity dynamics and visualization package. Freespace is available as open-source software to the

The test configuration aboard the parabolic aircraft is designed such that flight trajectories can be mimicked by positioning and orienting the two ends of the Hose, which are mounted to force/torque sensors within an 80/20 framework. The hose fixture will be free-flying to isolate it from disturbance inputs from the aircraft. It will be tended (held and released) by two members of the team. A support structure will be used to support the payload during non-test phases. 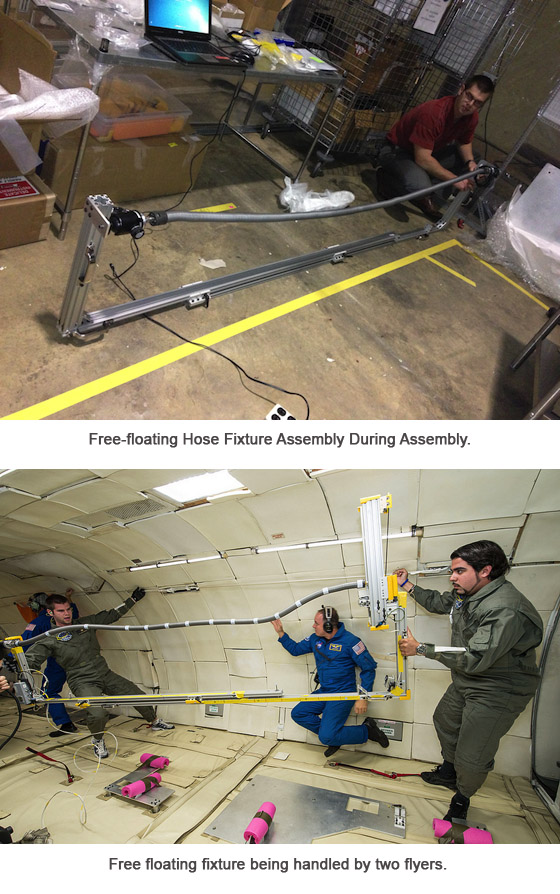 Our organization is studying methods and developing technologies to refuel and repair satellites in space via robotic means. Before the FOP flight, we could not verify whether our flexible fuel hose and its robotic handling procedures would require a complex and expensive fuel nozzle tool, or exactly how the flexible hose would behave in the absence of gravity. With the data gathered during the flights, our technological understanding has matured. We now know the circumstances under which the fuel nozzle tool can be rotated and positioned to ensure safe handling of the fuel hose. This is an important step to developing a complete system design.

Prior attempts by our team to obtain the behavior characteristics of a flexible fuel hose were hampered by the presence of gravity or the damping of water. This flight represents the most direct way the behavioral data could be obtained in a manner that matches the way the hose would be operated in space. The Satellite Servicing Capabilities Office at NASAâs Goddard Space Flight Center thanks the Flight Opportunities Program for this opportunity.