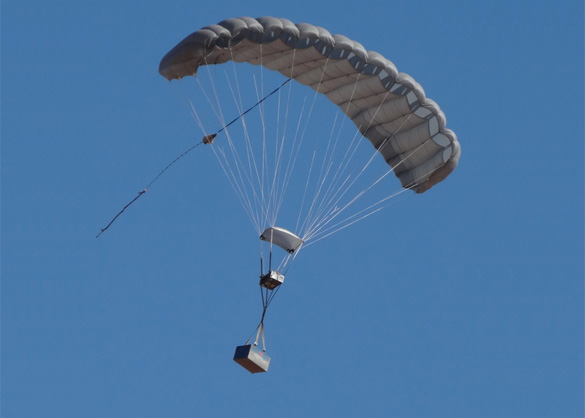 Airborne Systems provides parachute recovery systems for a wide range of Space applications and is currently providing the recovery system for the NASA Orion space capsule and several commercial space companies. There is a growing desire for recovery systems that provide extended crossrange capability and are steerable to enable precision landing of payloads. Airborne Systems will conduct high altitude drop tests of a payload consisting of a ram-air parachute system and an advanced guidance system to demonstrate system performance at higher altitudes than previously attempted.

The current state of the art for ram-air parachute systems enables deployments in the 20,000 ft range enabling up to 80,000 ft of crossrange. This technology will be extend deployments up to 50,000 ft and beyond, thereby nearly tripling the crossrange capability. This is beneficial for a number of applications including precision recovery of cargo and manned space capsules, spent boosters, and landing of reusable launch vehicles. For a reusable launch vehicle recovery, demonstrating the ability to deploy a high glide ratio ram-air parachute at higher altitudes enables commensurate increases in crossrange potentially further reducing the need to expend propellant to land precisely within the designated landing site.

This project utilizes mature existing technologies and is proposing to adapt these for applications in high altitude environments. There are three subject technologies to be advanced in this project; the ram-air parachute, the airborne guidance unit and associated parachute guidance and control algorithms. These components are integrated into a unique system and operated in a high altitude (55,000ft) environmental condition. The overall system is at a TRL 4. The test would maturity to TRL 6.

The resultant data and learning experienced in this test program will be beneficial to NASA, commercial space companies, and the military. The expansion of the controllable flight envelope of these parachutes would provide a game changing capability for a broad range of applications including future NASA interplanetary space missions.

The series of high altitude balloon drops have the following objectives: (1) demonstrate low density/high velocity deployment and performance of a guided ram-air parachute at altitudes beyond the current state of the art, (2) demonstrate the sequential staging of the system using our guidance system through ram-air parachute deployment, (3) demonstrate adaptive shaping of the airfoil for controlling aerodynamics during descent through the guidance system.

Three balloon drops are proposed wherein the first is at 45,000 ft. The second will be at 55,000 ft, and the third will also be at 55,000 ft but a more demanding flight profile will be demonstrated. In each of the drops, the parachute will be static line deployed at balloon release. The guidance system will track the payload during descent, initiate ram-air parachute deployment, and actively guide the system to a predetermined spatial waypoint.