Propellant quantity gauging is a critical function for space vehicles, yet the only way to gauge the amount of propellants in a low-gravity environment is to âsettleâ the liquid in the tanks by accelerating the vehicle and measuring the liquid level. Although this settled-gauging technique works well in many instances, e.g. during launch or main engine burns, it has drawbacks and penalties. At a low settling thrust the liquid slosh times are long, leading to inaccurate level sensor data. The penalty for this propellant gauging inaccuracy is additional propellant load, to cover the uncertainty margin. Without a settling thrust, the propellant quantity is even more uncertain. These difficulties could be overcome with a low-gravity propellant gauging technology, such as the Radio Frequency Mass Gauge (RFMG). The RFMG is a technology being developed at NASA to gauge cryogenic propellants in low-gravity, or under low settling thrust conditions where sloshing is also an issue. The technique has been proven to work very well in ground tests using liquid hydrogen and liquid oxygen, but lacked low-g testing prior to the parabolic flights. Related to T0024.
Work continues as a technology demonstrator onboard the ISS.

Acquiring low-gravity test data is undoubtedly the only way to demonstrate that the RFMG can accurately and reliably gauge the liquid quantity in low gravity. The RFMG has been successfully tested in liquid oxygen and liquid hydrogen at the NASA GRC cryogenic test facilities. It has undergone tilted-tank tests in our laboratory using Fluorinert FC-77, an inert simulant fluid, and has been tested in a large scale empty tank (6â diameter, 17â long, no fluids) with internal hardware elements. The RFMG technology is at TRL- 5, and the low-g aircraft test data provides limited TRL-6 evidence for some elements. We hope to conduct more low-gravity testing in the future aboard a suborbital reuseable launch vehicle.

Upon successful completion of low-gravity testing the RFMG will advance to TRL-6, since the essential elements of the technology will all have been tested in a relevant environment. At that stage, the technology will be relatively low-risk for implementing on a space-based payload or vehicle.

The RFMG was developed to fulfill the need for a low-gravity propellant quantity gauge, and may find use in future exploration vehicles such as a Cryogenic Propulsion Stage or space-based propellant depot. Commercial niche applications of the RFMG may include gauging of cryogenic liquid storage tanks and aircraft fuel tanks.

The primary objective of the parabolic flight tests of the RFMG was to collect multiple RFMG data sets during low-gravity parabolas at several different tank fluid fill levels, and compare the gauged result with the known fluid quantity. During each parabola, the RFMG collects approximately 15 different RF scans of the tank. Data from each RF scan is used to gauge the tank, and also provides a large data set at different fluid slosh conditions that is being used to further improve the gauging algorithm.

The Radio Frequency Mass Gauge measures the electromagnetic eigenmodes, or natural resonant frequencies, of a tank containing a dielectric fluid. The essential hardware components consist of a tank, an RF network analyzer that measures the reflected power from antenna probes mounted internal to the tank, and a computer. At a resonant frequency there is a drop in the reflected RF power, and these inverted peaks in the reflected power spectrum are identified as the tank eigenmode frequencies using a peak-detection software algorithm. This information is passed to a pattern matching algorithm, which compares the measured eigenmode frequencies with a database of simulated eigenmode frequencies at various fill levels. The database of simulated eigenmode frequencies is created in advance using RF simulation software to calculate the tank eigenmodes at various fill levels and liquid configurations. A best match between the simulated and measured frequency values occurs at some fill level, which is then reported as the gauged fill level. A patent application was filed for the RFMG in Sep. 2009.

The RFMG data collection is highly automated, and the operator needs only to start the software and initiate the gauging operations and monitor the experiment. During low-g aircraft testing, the FC-77 fluid fill level in the 30 gallon tank was changed on the ground before each series of parabolic flights. Approximately 40 parabolas of data are gathered at each fluid fill level tested, providing a large data set for post-flight analysis. 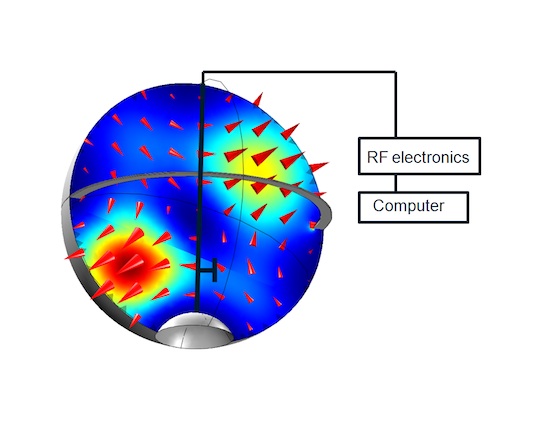