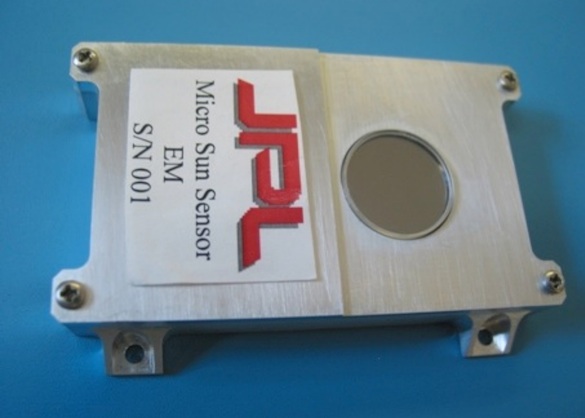 The micro sun sensor is a state of art miniaturized digital sun sensor. It was originally developed as a new technology at JPL from 2000-2004. It was base lined for the Mars Science Laboratory Mars rover and was qualified for an MSL environment and requirements (but not selected). The micro sun sensor has been a pathfinder for a new generation of sun sensors and has inspired a handful of other similar developments around the world. A prototype unit has been balloon tested to 125,000 feet. The micro sun sensor has now been flown on the FOP UP SL-9 sounding rocket. A micro sun sensor will be delivered Georgia Tech's Prox-1 Mission in 2015.

The micro sun sensor was flown on the SL-9 mission on 10/23/2014 at 7:33AM. During 7 minutes of flight, the background level on the CMOS imager rose to unexpected high levels, so the sun was not acquired. After the flight, it has been experimentally shown this was due to high temperatures (outside the specified operating range). During the remaining 8 minutes of the flight, the background level vent back to nominal levels and micro sun sensor operated nominally and acquired data successfully.