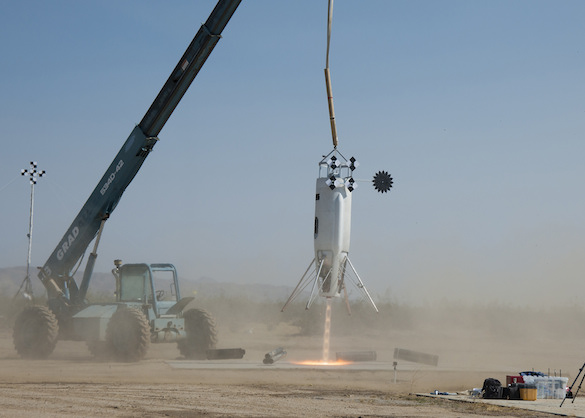 The search for Earth-like planets is among the highest priority pieces of science in the minds of NASA, the science community and the worldwide public. The technology we intend to flight test on an sRLV is on the critical path of the roadmap to flying such a mission. The Janus is a navigation device that will enable precision alignment of spacecraft over large distances in deep space. The program is designed to develop key technologies for a starshade mission as well as for deep space navigation and formation flying. The Janus, with its precision alignment information independent of GPS, will give new information to Masten Aerospace about the behavior of their vehicle.

In 2005, we invented a shaped design for an external occulter that, for the first time, supported sufficiently high contrast, sufficiently close to the parent star that one could design an affordable space mission to perform spectroscopy of Earth-like planets as far away as 60 light years (Cash, Nature2006). Now called a starshade, this external occulter involves two spacecraft, separated by tens of thousands of kilometers - one carries a telescope of conventional quality, and the other carries a petal-shaped opaque screen about 50m in diameter. The two craft must be held in alignment along the line of sight to the target star to a few meters accuracy. When the star, which is about 10 billion times brighter than the planet, is blotted out, none of its radiation enters the telescope where it would otherwise cause havoc, with scattered and diffracted light hiding the planet.

Demonstration of starshades is difficult because of the very large separations between the spacecraft. The Janus features a telescope that looks at a star and can simultaneously see a beacon 180 degrees away (opposite line of sight). As such, it provides very high quality information about its position between the main telescope and the target. This information will be used eventually in a feedback loop to the position control of the starshade.

The current state of the technology is TRL 4 for the application envisioned. We have conducted ground tests in which we were able to achieve centimeter-level positioning over 400 meters (beacon-Janus distance). We have flown our technology on an airship. Our next step is to port it to a rocket environment, which we will then mature into a space environment.

We will start at low altitudes and small separations and work towards increasing the distance between the sRLV and the ground beacon. The first step towards the mature state is to integrate the visual information obtained with the Janus system into the Xaeroâs navigation and guidance system. This information will increase the stability of the sRLV and serve as an adaptive guidance system.

The configuration of the payload during the airship flight consisted of: a main 6-inch telescope with a mounted 3-inch retroreflector; a 2-inch autoguiding telescope; and a 2-inch wide-field acquisition telescope, all mounted on a motorized altitude/azimuth mount. The payload was attached to the bottom of the zeppelinâs gondola.

The Janus system is an appropriate size and mass to fit on a Masten Xaero sRLV, and will require two standard optical grade windows in the payload fairing, one to view the star and the other to view beacons on the ground. Our instrument operates at ambient temperature and pressure, so it has no special environmental requirements. Our primary requirements are nighttime flights, a dark location for the ground telescope, and flight times that coincide with astronomical target stars. 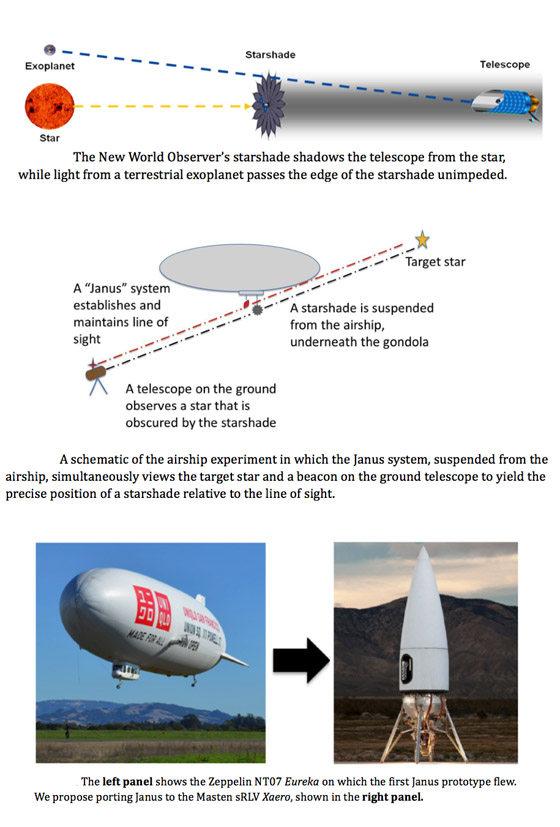