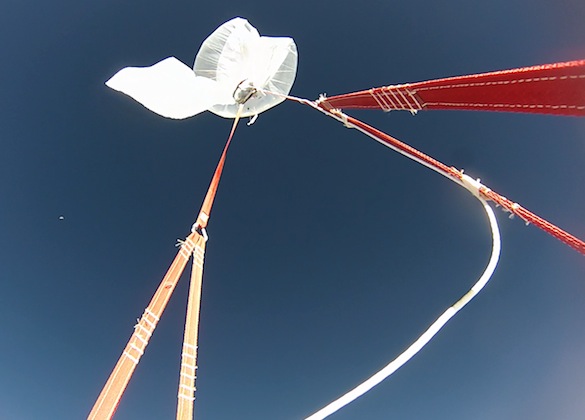 By 2020 nearly all US aircraft must be equipped with Automatic Dependent Surveillance-Broadcast (ADS-B) to fly in the National Airspace (NAS). This proposal is to fly a surrogate satellite ADS-B system at high altitude to evaluate overhead reception by future satellite platforms of both Universal Access Transceiver (UAT; 978 MHz) and 1090 Extended Squitter (ES) ADS-B signals from operational aircraft and ADS-B ground stations. The proposed flight opportunity will evaluate the collection of operational ADS-B signals from a relevant near space environment.

This experiment will evaluate high-altitude collection of the 978 MHz UAT ADS-B signal for the first time. This is significant as this has been identified by the FAA as the ADS-B signal that could be used for satellite-based ADS-B implementations in the future. Until satellite-based ADS-B is operational, a balloon-based capability such as this could be used (on-demand) to augment the existing ADS-B systemâs ability to track aircraft where there are currently gaps in ADS-B coverage including coastal areas to track trans-oceanic aircraft well beyond line of sight of deployed ADS-B ground based terminals and in mountainous regions where there are gaps in coverage below certain altitudes.

All proposed components for this project are COTS and are at least TRL-7 for use in aircraft. Successful completion of these tests, including addition of any necessary protective measures will result in a TRL of 7 for flight at the proposed high altitude near space environment.

The proposed effort is for two (2) Near Space Corporation (NSC) Small Balloon System (SBS) flights. On the first flight, the Transportable Airborne Multi Link ADS-B Coverage Evaluator (TAMLACE) system will store received ADS-B data (with time stamps) on-board the balloon in flight at 100,000â. This data will be used to characterize the volume of ADS-B traffic and evaluate any differences between what was collected in near space to what was collected by existing ADS-B ground stations. This first flight is proposed to be conducted from the NSC facility in Tillamook, OR and will capture ADS-B data from the moderate volume of air traffic in and around Portland, OR and Seattle, WA, out over the Pacific Ocean, and in the mountainous terrain of the Cascade and Coast ranges (i.e. everything within line of sight of the payload). The second flight will allow minor adjustments to the payload and can either repeat the first flight to gather additional data under different conditions (i.e. cloud cover or time of day) or optionally deploy to capture data in an area with notably higher volumes of air traffic (such as the Dryden Flight Research Center to collect on the Los Angeles area) to see the effects of data volume and pace on the system.